Manchester International Festival happens every two years. It’s an 18-day long festival which takes place over the summer with a range of events – all original and new work. The first ever festival took place in 2007, and newly graduated me back then decided to volunteer. The festival itself was a lot smaller then, although we had some big name artists performing…including Kanye West’s first ever performance in Manchester!

I really enjoyed volunteering, but by the time the next Manchester International Festivals came around in 2009, 2011, 2013, and 2015 I was so wrapped up trying to progress in my career, being in a relationship and generally not engaging with the arts that much.

Fast forward to 2017, after a few major life situation changes, I decided to volunteer for Manchester International Festival again and it was honestly one of the best things I did that year!

Here are some of my highlights from the festival and ways you can be a part of 2019’s Manchester International Festival.

People who volunteer are awesome. They just are! People volunteer for different reasons and most of the people I met through MIF had full time jobs, families and other life commitments, but they were happy to offer up their time for this festival. I did it because I’m interested in the arts, because I love Manchester and because I like talking to new people.

I refer to the people I know via volunteering as my “MIF Family” – there’s a really strong community of volunteers and since the festival I’ve kept in touch with so many of them!

2. What is the city but the people

The opening event to 2017’s festival was a celebration of Manchester people! A huge catwalk was created in Piccadilly Gardens and Manchester’s people walked the catwalk with their stories displayed on huge screens for all to see.

I volunteered at the rehearsals for this show – meeting and greeting the “Manchester people” involved in the show, making sure they’d signed consent forms, that they had food and snacks available, seeing how the show would come together.

I also volunteered on the day itself, welcoming the public into the area to watch the show, telling them what it was all about, and getting to watch this amazing event up close!

3. The Atmosphere in Festival Square

The main hub of the festival, also known as “Festival Square” is located right outside Manchester Town Hall. There’s food vendors, a gig venue inside, outdoor stages for live music, deck chairs, and it’s generally just a nice place to be!

I volunteered as “front of house” twice during the festival, including the first Friday night of the festival – having a chat to people as they joined us for some weekend entertainment, telling passers by what was happening here and getting free entry to the music gigs happening in the music venue.

As well as volunteering, I went to Festival Square on my lunch break from work, met friends there after work and I also spent the evening of my birthday there having an amazing time dancing into the early hours of the morning! 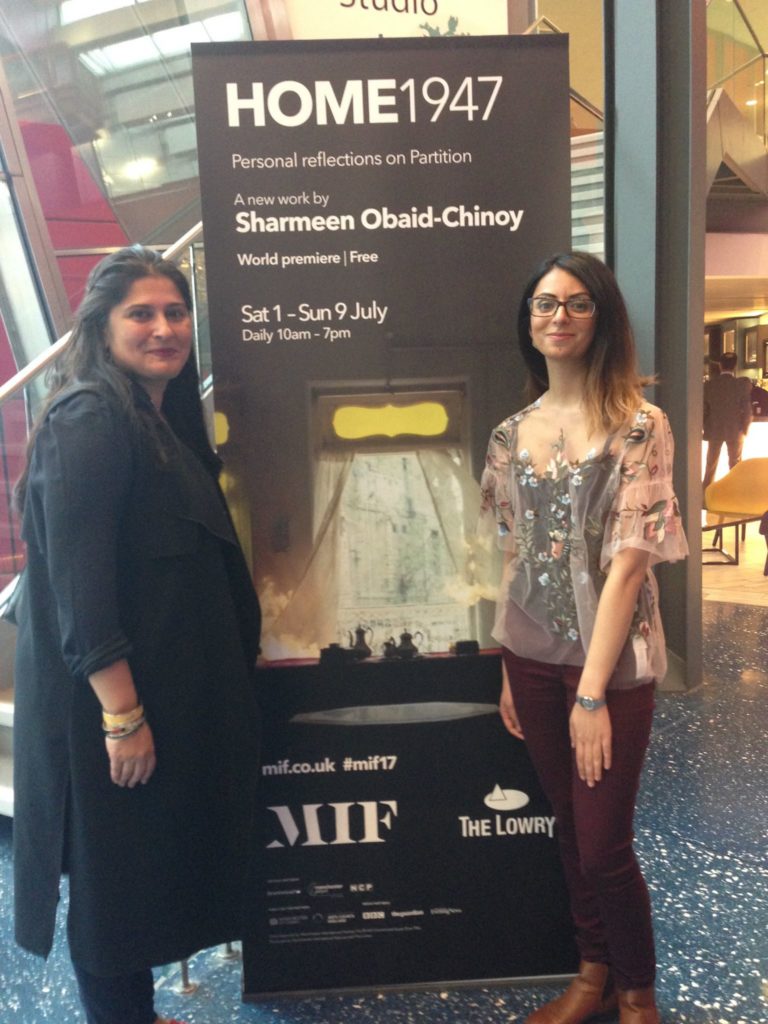 Double Academy Award Winner, Sharmeen Obaid-Chinoy was the artist behind the exhibition Home 1947 – a reflection on the partition of India and Pakistan. I volunteered at the VIP launch event of this and again during the festival for the public viewing and got to meet her!

As a volunteer, you get inside info on the full festival programme and as well as free tickets being up for grabs for me to use I also bought tickets to some of the shows and took my friends and family along. Two standout shows for me were: The Welcoming Party and the Flexn Residency Showcase at the Contact Theatre.

#TheWelcomingParty has been my fave @MIFestival show so far. So much energy, it was moving, funny, sad & full of hope #MIF17 pic.twitter.com/t9usMqvvj1

The Welcoming Party was an immersive theatre experience aimed at a family audience from the ages of 8+. The subject matter was pretty heavy, with the audience being part of a “welcoming party” for people who had just arrived in Manchester from different parts of the world – most of them asylum seekers. I took my 8-year-old niece to the show and as my Twitter review of the show said – it was moving, funny, sad, and full of hope!

The FlexN Residency show was one the less formal community events and I didn’t entirely know what to expect. I turned up on my own, found myself some fellow volunteer friends. Then, I was blown away by the dance and poetry showcase, there was free food and best of all, at the end they opened up the dancefloor and we were treated to some amazing breakdancing freestyle performances and it was just an awesome atmosphere!

I consider myself a pretty confident dancer, but wow I had nothing on this lot! Still, I couldn’t sit by the sidelines all night and got up on that dancefloor too!

Get Involved in MIF19

Can you tell I’m super excited for this year’s festival? I’ve already completed my volunteer application form, I have the 4-21st July blocked out in my diary and I’ve already taken part in some pre-festival volunteering and testing for one of the shows!

There’s loads of ways you can be a part of this festival, whether you’re an artist, want to be part of a show, or even if you’re looking for a job – they’re recruiting!

Find out more about how to be part of this amazing festival here: https://mif.co.uk/my-festival/