This week, Nile Rodgers and Chic played Castlefield Bowl in Manchester city centre as part of the Sounds of The City events.

I’m a huuuuuge fan of Nile Rodgers and Chic! For the uninitiated, Nile Rodgers has produced and played on some of the coolest funkiest songs since the mid 70’s – you’ve probably heard their music and not been aware they were behind these hits. My faves include:

(Link to my Spotify playlist below!)

Including this show, I’ve seen Nile Rodgers and Chic live 4 times. I first saw them at The 02 Ritz in 2013, then again at Manchester’s Apollo Theatre in 2015. They have a tradition where they invite members of the audience on stage to dance along to “Good Times”, and last year, at The Echo Arena in Liverpool, I was one of the people who was on that stage! And I got to meet Nile afterwards too!

And after joining Chic and Nile on stage and dancing to Good Times, when the show was over he came to meet everyone backstage for a little chitchat and selfies! I said “Nile, your music makes me happy” He said “that’s what it’s all about” ❤ I still can’t quite believe this all happened! Good Times indeed!

So, that’s the back story. Last Wednesday, on a sunny evening in Manchester, I found myself stood at the barrier in front of the stage, waiting to get my groove on. The support band had just finished, and they were setting up the stage for the main act.

The next thing you know, Nile Rodgers appears, just him, not the band, he came to say hi to the crowd before the show. 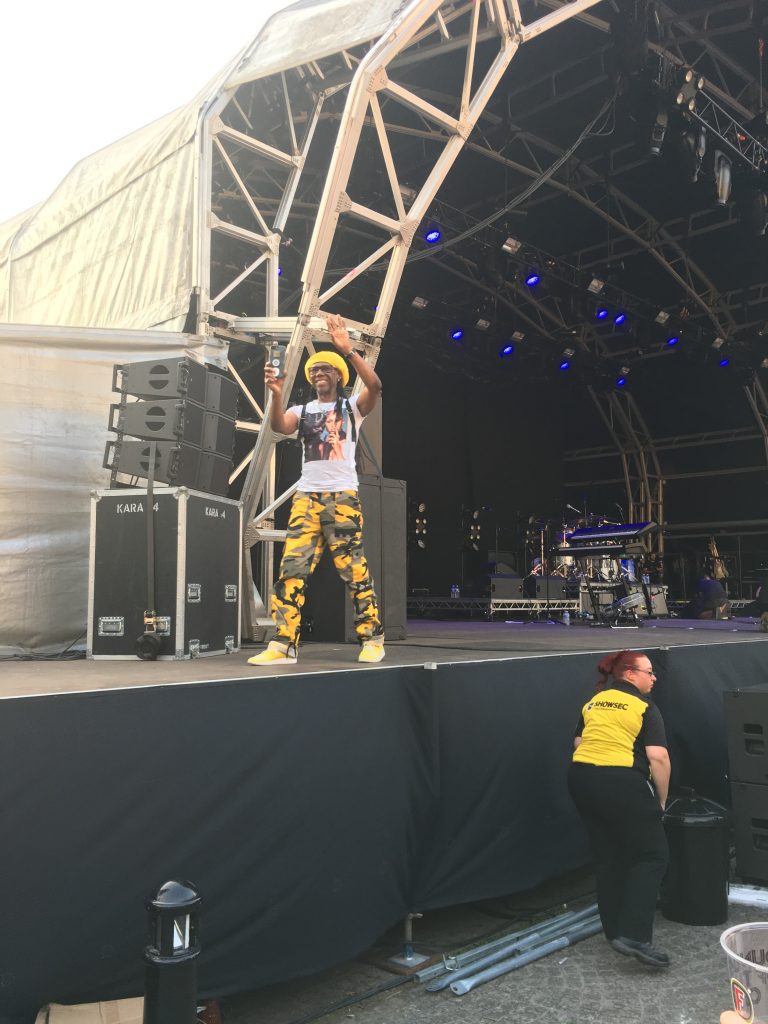 He walked along the front, shaking hands, taking selfies…and then he got to where I was stood. And he stopped, he stopped for longer than he’d stopped with anyone else and we had a proper chat! I reminded him we met back in Liverpool, to which he replied “I know” and he had a chat with my niece too 🙂

Ok let’s be realistic, he probably *didn’t* remember us, but you never know. My sister and I were practically the only South Asian people at the show in Liverpool and at the Castlefield Bowl show…so maybe that triggered something in his memory? But either way it made me happy that he stopped to chat. He is an awesome amazing person, and like I said to him in Liverpool: His music truly does make me happy!

The show was awesome, and it made me all the more happy to be outdoors, in the city I love. Good Times!